This article was published on the Site « List-column«

You may have no idea what crowd work is, and that is understandable. Most people do not. Crowd work is not a job that many aspire to, nor is it one that workers are necessarily proud of. It may not carry as much shame as some other jobs, but due to the low pay and unfair treatment workers often experience, it is not a job to boast about. 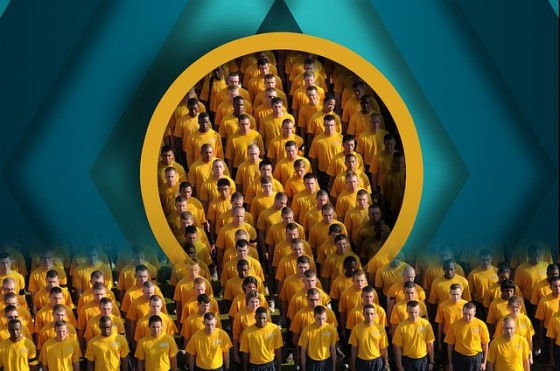 Crowd work comes in a variety of forms, but I define it as any paid work which is offered to or completed by a large group of people. Crowd work is the dirty secret of major corporations. It is a rising threat to economies and governments around the world, and it could be a future for many people as they try to make a living. In this article I wish to reveal the exploitation of crowd work, the pressing threat it has become when paired with automation, and some possible avenues of resistance that we can use to protect ourselves and our loved ones in a future where this is the only option left for income generation. I want to show the reality of crowd work and how harmful it could become.

An Introduction to the Platforms
A few major forms of crowd work are found today. The first are macro-task platforms such as Upwork, Uber, and Fiverr,where work is offered to a large group of people, but only one completes it. Competition is fierce, so pay declines over time, and worker reputation, which is key to accessing more work, is totally in the hands of the work requester.

In the second category of platforms – crowd contests – not only is low pay an issue, but also no pay at all. A job requester posts a project to be completed and anyone can submit what is requested. For example, online crowdsourcing platforms for designs such as 99designs, one might submit a logo; on CoContest, one could provide a vision for the interior design of a room. This becomes precarious is when the submission deadline arrives and the work requester then chooses only a few, or even just one, of the entries to be paid. They not only den payment to the rest, but are able to keep all the work submitted as there is no requirement for the requester to delete anything they received.

This sort of wage theft is not restricted to crowd-contest platforms. It is also an ethical issue with micro-task platforms, where the job is broken down into small components which may then be completed by a number of different people. These platforms include CrowdFlower, OneSpace, and my own domain of expertise, Amazon Mechanical Turk (‘mTurk’), where I have been a crowd worker for more than 10 years. In that time, wage theft has been one of the most pervasive problems, where the requester of work can keep all submissions but is able to ‘reject’ a submission without any reason. The workers loses that income, but may also find themselves unable to work as their rejections accumulate and they become unqualified for other tasks. Worse, they may be suspended from the platform for a high rejection percentage, and therefore become unemployed.

On all of these platforms, low pay, unfair treatment, and the inability to fight back means that the worker is exploited, isolated, and left to fend for themselves.

As these companies become more profitable, new platforms spring up to offer similar services for professions we would have assumed were unsuited to a crowd work approach.

Any career, from computer programmer to author to doctor, has at least some elements a crowd could complete. Computer programmers are already often beholden to being independent contractors, and it is easy for a company who would typically hire such a professional to instead tell them to sign on to ComputerProgrammerCrowd.com to find available work in the future. If all companies who need programmers agree to this cheaper, easier and faster way of accessing the global experts they need, suddenly there are no more full-time jobs available and all computer programmers are left battling for whatever might be posted. The same goes for authors, who might then be micro-contracted to provide a single book or chapter or page for a few cents per paragraph. While we assume the job of doctor requires hands-on diagnosis, some researchers are already exploring using mTurk for diagnosis, cancer detection, and more (Cheng et al., 2015). We have been worried for so long about automation taking our jobs from us that crowd work has slipped beneath the radar, but already corporations are considering how to use it to replace workers of all types, as evidenced by the work I see every day on mTurk.

With the knowledge that it is now possible for all work to be found and completed on such a platform, we must consider how this will affect our economies and government programs. To begin with, an independent contractor does not necessarily pay into health insurance, pension plans, unemployment benefits, and the like, and yet if they are being severely underpaid because no minimum wage laws apply to their job, they are also likely to need access to these services. In fact, the reporting of income is left to the worker but the process of keeping track of what is earned is exceptionally difficult in my experience, so the worker is often unable to accurately report their income.

On top of this, since many crowd workers make very little, there is no income tax to pay. In a future where crowd work is the norm, how will governments fund their programs? We would hope that the money would come from the corporations which run these platforms, but right now most of those companies reside in the United States whereas the crowd workers can come from anywhere, so where will all other countries find the income they need to operate?

Resistance by Workers and Governments
This non-traditional employment relationship is like nothing we have ever seen before, and the laws we have in place to protect both workers and governments’ financial infrastructure no longer fit the bill. So, what do we do now to prevent a future where workers make a paltry living and governments are unable to raise the funds they need to operate?

Resistance against this future is not futile. Our approach to the creation and use of such platforms can be altered by social and governmental pressures. For example, while workers on mTurk are isolated by the platform’s design, we have banded together in communities external to Amazon, such as my own website TurkerNation.com, in order to consider how to make working on the platform safer and more lucrative. From there, we worked with academics from American universities to create WeAreDynamo.org, a forum where mTurk workers could create campaigns anonymously.

Our first success was the Guidelines for Academic Requesters (Dynamo, 2014), a set of rules for those who wish to use mTurk ethically. The second, the Dear Jeff Bezos campaign (Dynamo, n.d), had workers write letters to Jeff Bezos, CEO of Amazon, stating why we work on the platform and what sort of changes we would like to see. This set the tone for future organizing of not only mTurk workers but all crowd workers, and we hope to come up with more innovative campaigns to bring about change.

Another desire I personally lobby for is government legislation to require platform transparency. If we knew how many people worked on mTurk, where they come from, and how to contact them, workers could form groups and organize on a much greater scale. On top of this, government would now know how many and which of their citizens are working on these platforms, and that may help them determine ways to get companies to pay their fair share towards services. The creation of ethical platforms is yet another avenue to secure a better future for work. Whether they are cooperatively built, with workers voting on all decisions, or take some other format, ethical platforms will attract the best workers and therefore the most work requesters, creating a profitable endeavor. If they also focus on being good corporate citizens, working with governments would ensure funding of the necessary social services.

Together, worker-focused organizing, legislation and platforms offer the possibility of taking back the future of work to benefit the worker once again. This technological revolution in work is still young, and it is up to us to mould it into what we wish it to be – ethical work that pays fairly and supports the worker.

Kristy Milland is community manager of TurkerNation.com.
She has been a crowd worker for the last decade, as well as a Requester and a researcher. She is currently engaged in multiple projects to create new platforms which will offer fair compensation and other benefits to crowd workers.