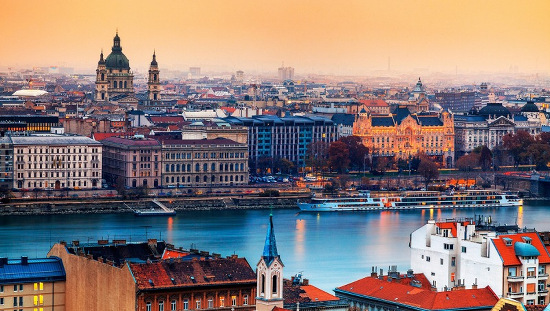 Hungary’s labour market still carries the weight of post-socialist transformation. As a large share of employees became redundant in the 1990s, an emphasis on passive labour market policies and social welfare became a massive burden on government spending. While the system went through various smaller reforms, and welfare provisions were cut repeatedly during the past 20 years, the conservative government formed after the elections in 2010 decided to take a radical turn.

After a post-crisis stagnation, Hungary experienced steady economic growth in the past two years. Along with record low inflation this led to rising real wages and significantly lower unemployment rates. However, large groups of the population did not benefit from this positive turn: higher employment rates include participants of the large-scale public works programme with a monthly wage below EUR 200, and social benefits were cut radically. After several waves of increasing and decreasing social welfare spending to compensate those who became redundant on the post-socialist labour market, the Conservative government elected in 2010 made a shift toward a « labour-based economy », with an emphasis on public works instead of welfare provisions, a larger share of vocational secondary training, and certain tax cuts. However, it seems to be questionable if these measures are effective in increasing employment in the long run, and if we take into account the dependence of recent growth on EU subsidies, the picture gets even gloomier.

The economy of Hungary plummeted in the first years of the financial crisis: in 2009 the GDP shrank by 6.6%, and after two years of weak growth it fell back to a recession of 1.7% in 2012 according to the Central Statistical Office of Hungary. Since 2013 the economy seems to be back on a growth track, reaching a growth rate of 3.7% in 2014, and an expected growth of about 3% last year. 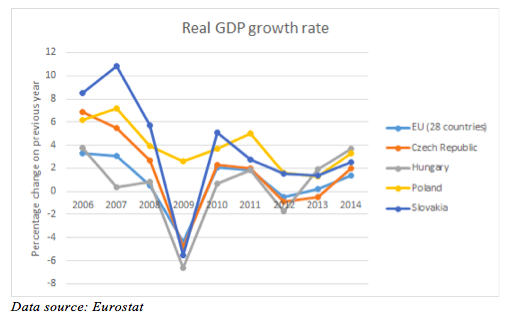 However, the average growth rate of the Hungarian economy was still significantly lower than GDP growth in other countries of the region, especially Poland that did not experience a recession even during the years of the economic crisis.

Dealing with the debt burden

Lower average growth also meant that the government had less space for manoeuvring during and after the years of the crisis. Another burden adds on to this, namely the relatively high gross government debt of the country, which is still higher than 75% of the GDP, after peaking above 80% in 2011. In order to limit the costs of financing this large debt, Hungary needs to have low government deficit, even lower than other countries of the region that managed to keep their debt at much lower levels, mostly below 50% of their GDP. 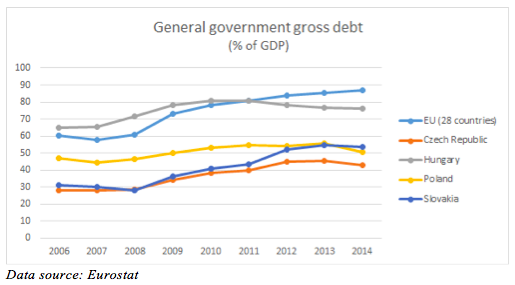 This debt burden, along with political motivations to cut welfare spending for the inactive population played an important role in the welfare system reform implemented by the Conservative government elected in 2010. Ágota Scharle and Dorottya Szikra (2015) argue that although welfare provisions were cut repeatedly in Hungary since the country’s democratic transition, the changes after 2010 were more fundamental and had more political motivations than earlier ones.

Unresolved problems of the post-socialist transformation

To put current measures into context, we have to go back a bit further in time. The democratic transition of Hungary was coupled with a transitional crisis that had serious impacts in the labour market: employment rate dropped from 71% in 1990 to below 55% in 1993, and this trend didn’t stop until 1997. Large numbers of newly redundant workers needed to be compensated by the welfare system in order to maintain political stability, and by 1995 the share of welfare recipients among the working age population reached 31%.

At the same time it is important to note that most of the labour market measures in the early 1990s could not go beyond the monetary compensation of the newly unemployed. Even though Public Employment Services were strengthened, their capacity remained largely inadequate to provide individualized assistance or to implement active labour market policies that would have allowed job seekers to develop their skills according to the changing demand. The situation of large groups of the population, including those who lost their jobs during the transition was further aggravated by the austerity package of 1995: the real wage declined by 12 per cent, the replacement rate for the unemployment benefit was cut from 75 to 65 per cent, and several other social provisions were also cut or abolished.

For about a decade Hungary experienced steady growth after the austerity package, with annual growth rates often reaching 4.5% until 2005, when the pace started to slow down. During the second part of this period (which included the date when Hungary joined the European Union, 2004), government spending also increased significantly. Between 2000 and 2006 welfare spending rose from 27.6% to 31.8% of the GDP, with a budget deficit reaching 9% by 2006. According to Scharle and Szikra (2015), government overspending can be attributed to various factors, such as unresolved structural distortions in the economy, the fact that the initial choice of a policy mix dominated by passive rather than active labour market policies was hard to reverse and did not contribute to employment growth, while doubling the minimum wage in 2001-2002 further reduced demand for unskilled labour.

As the crisis turned the economy into recession, public deficit and therefore government expenditure had to be cut. As part of the austerity measures, total government expenditure on social protection was cut from 18.6% in 2009 to 16.1% in 2012 according to Eurostat data. While most of the higher income countries increased spending on social welfare since the beginning of the financial crisis, in Hungary the then incumbent Socialist government already implemented restrictions in 2009, including freezing the nominal value of social assistance and family provisions and abolishing the thirteenth-month pension.

The successive Conservative government went further, decreased the nominal value of social assistance, abolished early pensions and reduced the duration of insured unemployment benefit from nine to three months in 2011. But all these measures were part of a larger ideologically-driven package, a factor that distinguishes this reform from earlier welfare cuts. The Conservative government’s explicitly stated goal has been to strengthen upper classes through the 16 per cent (from 2016, 15 per cent) flat-rate income and generous child tax credit, while putting an emphasis on increasing employment to build a « labour-based economy », and to follow the Chinese way of development, as it was put on several occasions by members of the government.

At the same time, spending on active labour market policies, such as jobcentre services and training is still low compared to other European countries. For instance, while in 2013 the long-term unemployment rate was approximately 2 per cent in Germany, and significantly higher, almost 5 per cent in Hungary, Germany spent almost the same share (0.65%) of its GDP on ALMP measures and services as Hungary (0.78%). 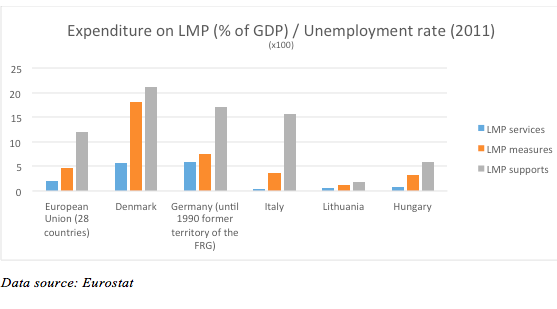 One important element of the new policy mix is the large-scale public works programme, which was designed with the aim of leading public welfare recipients back to the primary labour market, but in reality it mostly works as a substitute for unemployment benefits. In various rural regions of Hungary this is the main form of available employment, and the number of participants in the programme rose to 225 000 by January 2016, which is more than 5 per cent of the employed population. Participants mostly work on tasks that require no specialized skills, such as cleaning the streets, for a monthly net wage lower than EUR 200, while training opportunities are scarce in most of the municipalities. 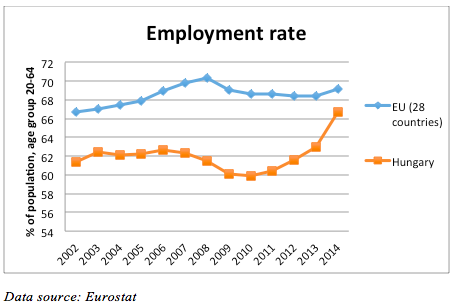 Even though employment rate grew significantly and unemployment decreased in the previous years, if we do not count those employed in the public works programme, the activity rate is still much lower than the European average, and it is also lower than in most of other post-socialist countries in the region. The policy shift also affected the educational system: compulsory schooling age limit was reduced from 18 years to 16 years, and significantly more students are channelled into vocational secondary education that does not provide high school leaving certificate, and hence, no chance of getting into tertiary education. This is particularly problematic in light of the huge gap between the expected salaries of those who have a school leaving certificate and of those who do not have one, but besides the difference in salaries, for those who attend vocational training schools the probability of becoming NEET (« Not in Education, Employment, or Training ») between 25 and 29 years of age is almost twice as high as for those who receive a high school leaving certificate.

Whether these measures will lead to higher employment rates in the primary labour market in the long run is still uncertain. However, to date an overwhelming majority of participants in the public works scheme seems to be trapped in the programme. Csillag and Fertig (2015) for instance argue that by channelling a wide range of unemployed people into the public works programme, with almost no regard to individual skills and motivations, the state loses on those who would be able to find a better position with more individualized help. Therefore it is likely, that investing in active labour market policies, and focusing on the prevention of long-term unemployment would be more efficient in the long run, even if it seems more costly in the short term.