Geography of Offshoring is Shifting 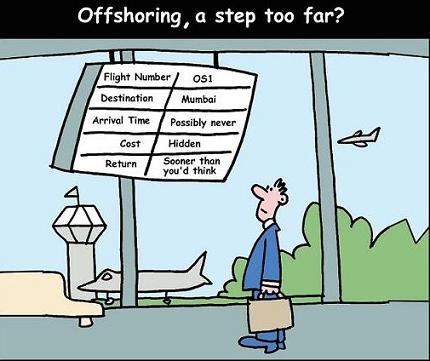 Chicago (May 18, 2009) – Deteriorating cost advantages and improved labor quality are driving a dramatic shift in the geography of offshoring according to the latest edition of global management consulting firm A.T. Kearney’s Global Services Location Index (GSLI), a ranking of the most attractive offshoring destinations.
While India, China and Malaysia retain the top three spots they’ve occupied since the inaugural GSLI in 2004, a fundamental shift in the index has taken place as once strong Central European countries have yielded ground to countries in Asia, the Middle East and North Africa.

The GSLI analyzes and ranks the top 50 countries worldwide for locating outsourcing activities, including IT services and support, contact centers and back-office support. Each country’s score is composed of a weighted combination of relative scores on 43 measurements, which are grouped into three categories: financial attractiveness, people and skills availability and business environment.
Established Central European countries including Poland, the Czech Republic, Hungary and Slovakia, once among the premier offshoring destinations for Western Europe companies, have fallen significantly due to a rapid increase in costs driven by both wage inflation and currency appreciation against the dollar. Meanwhile, low-cost countries in Southeast Asia and the Middle East made significant gains this year as the quality and availability of their labor forces improved. Egypt, Jordan and Vietnam ranked in the GSLI’s top 10 for the first time ever.
« While cost remains a major driver in decisions about where to outsource, the quality of the labor pool is gaining importance as companies view the labor market through a global lens driven by talent shortages at home, particularly in higher, value-added functions, » said Norbert Jorek, a partner with A.T. Kearney and managing director of the firm’s Global Business Policy Council. « In response, governments all over the world are investing in the human capital demanded by the offshoring industry. »
The complete results of this year’s Index are provided below. A more detailed analysis and information on regional performance can be found at www.atkearney.com.

Highlights from this year’s GSLI include:
• The Middle East and North Africa is emerging as a key offshoring region because of its large, well educated population and its proximity to Europe. In addition to Egypt and Jordan, ranked at sixth and ninth, respectively, Tunisia (17th), United Arab Emirates (29th) and Morocco (30th) all rank among in the GSLI’s top 30 countries. « The Middle East and Africa area has the potential to redraw the offshoring map and in the process bring much needed opportunities for its large, underemployed educated class » said Johan Gott, project manager for the Global Services Location Index.
• Saharan Africa also showed strength. Ghana ranked 15th, Mauritius 25th, Senegal 26th and South Africa 39th.
• Countries in Latin America and the Caribbean continue to capitalize on their proximity to the United States as nearshore destinations. Chile placed highest among countries from the region, ranking 8th on the strength of its political stability and favorable business environment. Other strong performers in the region include Mexico (11th), Brazil (12th) and Jamaica, which rose 11 places to rank 23rd.
• India, China and Malaysia continue to lead the index by a wide margin through a unique combination of high people skills, favorable business environment and low cost. In particular, India has remained at the forefront of the outsourcing industry and actually has become an enabler for industry growth through expansion of Indian offshoring firms into other countries.
• The United States, as represented by the onshoring potential of smaller « tier II » cities such as San Antonio, rose to 14th in the rankings due to the financial benefits of a falling dollar. The country is the leader in the people skills category and the combination of rising unemployment and political pressure to create jobs is increasing interest in onshoring possibilities among smaller inland locations. Similar trends are evident in the UK, France and Germany, all of which also rose in the GSLI.

While the global financial crisis has slowed recent offshoring moves, the percentage of companies’ staff offshore may very well increase as a result of the crisis. Layoffs at home are not translating to layoffs among offshore workers as companies seek to maintain service but reduce costs. Additionally, offshore facilities tend to be more efficient because they are newer and lack years of inefficiencies often built up in onshore facilities.
« The dynamics of global offshoring are clearly shifting as companies re-evaluate the political risks, labor arbitrage and skill requirements in the context of the likely aftermath of the global economic crisis » said Paul A. Laudicina, A.T. Kearney chairman and managing officer. « Risk management will take on new importance to protect global service delivery from interruption and ensure capabilities are strategically dispersed rather than concentrated in a few cost-effective locations. »