The impact of EU Directives on UK Employment Relations (EN)

In their proper desire to persuade UK trade unionists to vote to REMAIN within the European Union on June 23, the Trades Union Congress (the UK’s sole trade union confederation) and Jeremy Corbyn, the leader of the Labour Party, have argued that British workers are protected from the abuse of their employment rights by several EU directives. What is the truth of this argument? Steve Jefferys, Emeritus Professor at the London Metropolitan University, answers: 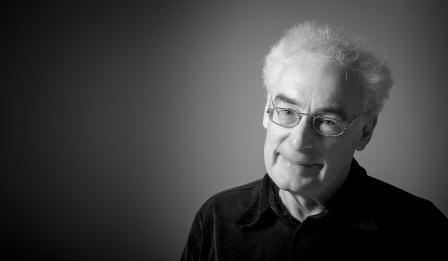 To answer it is first necessary to sketch a little background to the employment law and protection context. Then I shall assess the impact of each of the 19 most significant directives on British workers. Finally I will make what, for me, is the key (albeit negative) argument that justifies arguing that EU employment law is a strong reason for voting REMAIN: namely that the nationalist LEAVE campaign would tear most of it up.

Britain had a weak structure of employment law before the 1980s. Otto Kahn-Freund famously analysed it as ‘collective laissez-faire’: trade unions, arguably only between roughly 1910 and 1980, were strong enough to secure agreements on joint regulation with UK employers. ‘There is, perhaps, no major country in the world in which the law has played a less significant role in the shaping of these (industrial) relations than in Great Britain and in which today the law and the legal profession have less to do with labour relations’ (Kahn-Freund, 1954: 44). The unions opposed direct state intervention which, they considered, would be more favourable to employers than to workers. The employers opposed legal solutions because they feared limiting their prerogatives. Collective bargaining agreements at national and local level were accepted by both unions and employers as binding – even though they could not be enforced in the courts.

Under the Conservative governments of 1979-1997 this structure was turned upside down. Union strength collapsed, in particular after the defeat of the bitter year-long miners’ strike of 1984-1985. From nearly 12 million members in 1979 trade union membership had fallen to below 8 million in 1997. Employers had less and less reason to negotiate collectively at national and sector level. In the public sector, where trade union density remained high, collective bargaining took the new form of consultations within ‘independent’ pay review bodies. By 1997 there were virtually no national or sector collective agreements between unions and employers left in place. Employers’ associations also withered away leaving only shell self-promotional and self-interested lobbying groups.

The ‘free market’ Conservative governments also introduced a new hostile legal framework. Trade unions were no longer to be allowed to act freely. The 60 restraints on trade unions imposed between 1980 and 1993 included undermining collectivism through legalising incentives for workers to move to individual contracts, requiring all industrial action votes to be taken through postal ballots rather than at the workplace, and giving individual workers as well as employers the right to seek injunctions against strikes. Other restraints sought to weaken collective action, such as limiting pickets to a maximum of six people, requiring 7 days’ notice of ballots and of industrial action, making all solidarity action illegal, and permitting the selective dismissal of strikers who take unofficial action. The 1992 Trade Union and Labour Relations (Consolidation) Act (TULRCA 1992) brought six earlier measures together, essentially implementing Friedrich Hayek’s 1979 blueprint for Thatcher’s industrial relations reform (Wedderburn, 1995; Howell, 2005). It became illegal for employers to agree that new recruits should be members of a trade union. Trade union activists who are selected for dismissal or redundancy had to prove this was ‘unfair’, and resulted directly from their trade union activities. If – an unlikely outcome – they win the case in an Employment Tribunal, it has no power to require their reinstatement.

In these highly defensive circumstances the TUC and most British trade unions were convinced by Commission President (1985-1995) Jacques Delors to shift from opposing the European Economic Community (EEC) to supporting the 1986 Single European Act combined with the 1989 Social Charter of Workers’ Rights, opposed by Margaret Thatcher.

The EEC ‘social dimension’ was virtually non-existent before 1989. The ‘market-regulating’ aspect of EU social policy embedded in the predominantly monetarist 1991 Maastricht Treaty covered five areas: ‘subsidies and income-maintenance for farmers; inter-regional inequalities; the coordination of an employment strategy; consumer protection, the environment and health and safety; and framing labour market regulations concerning workers’ rights and social dialogue (Marginson and Sisson, 2006: 37).

This social policy was criticised in several academic studies as being ‘cosmetic’, as failing to combat the inegalitarian pressures unleashed by the single market, as involving essentially supply-side measures focusing on individuals and regions and as inadequate as social policy instruments (see authors quoted in Carpenter and Jefferys, 2000 : 221). While a few social directives were implemented prior to 1997, the UK only signed up to Social Charter under the New Labour government.

Social directives and their impact on the UK 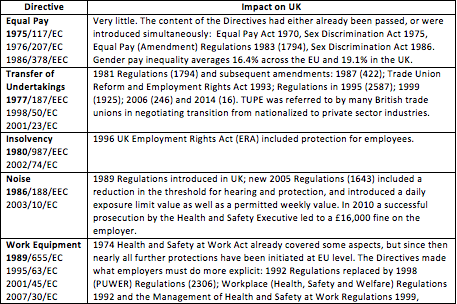 Looking at the global impact of the social directives on UK employment relations helps explain the lack of resonance of the ‘EU protects UK workers’ rights’ argument. We can see that only in a handful of areas (Health and Safety, European Works Councils, Employment Equality) did the EU directives significantly extend protections. In most cases they either reproduced elements of the pre-existing law or legalised practices that were already wide-spread. In some cases the British transposition by the Conservative or Labour Parties deliberately undermined or avoided key elements of the directive that might have provided trade unions with stronger levers to use against the employers.

In those cases where workers’ rights were genuinely increased their reach was often restricted. Whether on levels of workplace noise, or for the few thousands of European Works Council attendees, or for the few who take their employer to court on the grounds of religious or sexual orientation discrimination, the total numbers of workers involved is limited.

The largest number of workers who have even heard of European directives are the millions who have signed an employment contract specifically waiving their rights to protection by the Working Time Directive.

A progressive argument against Brexit sadly cannot be based on the few (often unseen) positive effects. Rather it is on the probable consequences of Brexit.

The Conservative leaders of the Brexit campaign have made it very clear that a major reason for their opposition to EU membership is because of the need to ‘free’ Britain from the ‘mass of Brussels regulations’ that impact on UK business.

Brexit would lead to the re-writing of nearly all the social regulations and laws that transpose EU Directives. The UK’s myriad of Thatcherite and post-Thatcherite neo-liberal ‘think tanks’ are drooling with joy at the prospect.

In the context of the continuing global economic crisis that will have fuelled such a successful anti-immigrant UK referendum result, where the ‘race to the bottom’ competitive survival logic will demand greater austerity, lower wages and worse working conditions, there is little doubt that the Conservative majority in Parliament will seize the opportunity.

Workers’ rights will be targeted first and foremost in order to ‘reheal’ the self-inflicted divisions with the Conservative Party over the referendum. They will be reduced back to levels more appropriate to the current weaknesses of the trade union movement than to the levels that emerged from the period 40 years ago when half Britain’s workers were trade union members. This is the one strategy they will all agree on – whoever would be the post-Brexit prime minister.