Surely the strike over the use of Italian labour is just the latest example of the Brits not being good Europeans? Paradoxically it turns out the strike is very European and tells a more complex and nuanced story with a sting in the tale. 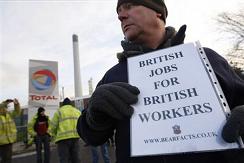 Workers across Europe, including workers in France, Bulgaria, Latvia and Greece have been demonstrating about jobs. According to the ILO the global recession threatens up to 50 million jobs around the world this year. Workers are right to be concerned about job security. Articulating demands that will mitigate the problems of the recession is more difficult. Governments have responded to the financial crisis by pouring billions of Euros into the banking system. To many people this looks like their Government bailing out the very people that caused the crisis. It may be a necessary step in dealing with the financial crisis; but it is not a sufficient one. Governments need to do more to address the concerns of ordinary people about how the recession will affect them. The demonstrations have focused on the inadequacy of governmental response to the crisis. Ironically ‘British Jobs for British workers’ is a slogan coined by Prime Minister Gordon Brown and its adoption by British strikers echoes the critical approach to government seen in demonstrations across Europe.

All very well, you may say; surely the dispute is still about keeping foreigners out of so called British jobs? Here it gets more complicated. According to the strikers the Italian workers, who are posted workers, that is to say they were brought in by their employer from Italy, are paid less than the going rate for the job. A charge denied by Total, the French company who own the refinery. The difficulty is that under the Posted Workers Directive it is perfectly possible to bring in workers from another country to undercut local pay and conditions. This is why European trade unions are demanding that the Directive is amended to ensure that it doesn’t lead to what has been termed ‘a race to the bottom’, as companies use it to undercut established pay rates.

Actually it is difficult to know why the Brits are complaining about the Posted Workers Directive. While it is true there are 15,000 European posted workers in the UK; there are 47,000 posted workers from the UK working in other European countries . For most British workers the Directive is a mystery; they are, however, familiar with the widespread use of subcontracting and the lack of any established sectorial pay rates in the UK. In the Anglo-Saxon economic model the freedom for employers to pay below an agreed rate is claimed to create more jobs. Yet as the recession bites the promise of more jobs looks more and more hollow, leaving workers to question why they should accept undercutting.

These three threads, unhappiness with the Government, concern about the Posted Workers Directive and opposition to undercutting, all run through the Lindsey oil refinery dispute. But still the enduring image of the dispute is the slogan ‘British Jobs for British Workers’. For all the analogies with European demonstrations, and concern with European Directives, the dispute still has a faint whiff of xenophobia. After all, the dispute was only settled when Total agreed to give more jobs to Brits.

Over the last ten years immigration has grown to be the single most important policy issue facing the UK, with over 40% of the UK population putting it as their number one concern, according to a House of Lords Report in April 2008. Immigrants comprise around 12% of the UK workforce. Politicians have become increasingly reluctant to champion immigration at a time when British workers are losing their jobs. The press have become ever quicker to print alarmist stories, using headlines like ‘They’re Stealing Our Jobs!’ Inevitably the Lindsey dispute has been seen as a barometer of working class antipathy to migrant workers. Actually it is not a very good barometer, as there are relatively few migrants working in the refineries and power stations where the dispute and sympathy action have taken place. And to their credit the TUC and British unions have been very clear that the issue for them is not foreign workers, but access to jobs and fair pay for all workers.

The danger is that in a recession it is always easy to blame the outsider, the foreigner, for job losses, when the real reasons are more complex, difficult to understand and less tangible. After all that is what Hitler and Mussolini did in the 1930s. The parties of far right, like the BNP, are already seeking to make political capital out of the dispute. It is important that the Government doesn’t provide the mood music for the bigots and xenophobes by seeking to appear ever harder on migrants, as if they were to blame for unemployment in some way. Actually migrants make a vital contribution to the UK economy and public services. If the economy is going to blossom once again the UK will need the commitment skills and enterprise that migrants bring with them. And this is not just a UK problem; this is about free movement of workers around Europe.

The correct response for Governments across Europe and those of us who want to avoid the mistakes of the past is to tackle the real issues raised by the dispute. The sense of helplessness workers feel when faced with a global recession. Governments need to be seen to be on the side of the man in the street; not just saving the bankers. Ending the unfairness of the Posted Workers Directive would be a step in the right direction. Tackling the inequities of the contracting system, so that contracting work out isn’t simply an exercise in reducing workers’ pay and conditions would be another important step. There are also simple things that could be done at national and European level to reduce the often serious health consequences of restructuring for the individuals affected. In the absence of meaningful action by governments and Europe, there are plenty of siren voices only too willing to exploit the void to stir up discord and hatred between workers from different countries. The real sting in the tale of the Total dispute is that it shows how doing nothing to address the concerns of workers in the worst recession since the depression could leave the floor open to those who want to ferment race hatred, just as it did in the depression.